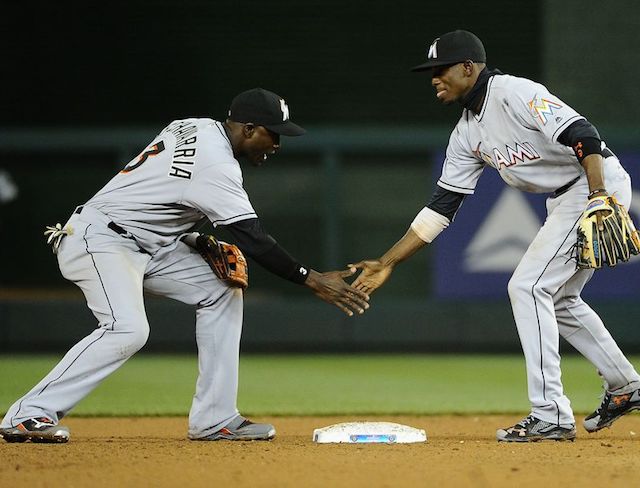 One person, however, whom the Fish acquired and put on their staff who has actively helped the defensive cause is infield coach Perry Hill.

The Miami Marlins have long talked the talk about improving their defense, but rarely had they walked the walk in terms of acquiring talent to provide that defense. One person, however, whom the Fish acquired and put on their staff who has actively helped the defensive cause is infield coach Perry Hill. Hill became a member of the Marlins once again in 2011, returning to the role of infield coach which garnered him and the team significant success from 2002 to 2007.

In the latest piece on Hill’s work with the team, Craig Davis of the Sun-Sentinel points out that simplicity is the key to Hill’s teachings.

Hill, nicknamed Bone since childhood due to an affinity for chicken wings, conducts class there daily during spring camp. Although it is a school of higher learning, what Hill preaches is quite elementary.

“The way he breaks it down, it’s simple,” says Derek Dietrich, who works with Hill on playing first, second and third. “It’s nothing mind-boggling. It’s simple fundamentals that always apply.”

Hill, 64, developed his system while playing in the minor leagues in Mexico. He spent countless hours throwing a ball against a wall and boiling down the key components of fielding it and throwing to record the out to his 6 F’s: feet, field, funnel, footwork, fire, follow.

Those six F’s have brought the Marlins a decent amount of success. Much has been made of the fact that Dee Gordon went from a below-average, albeit inexperienced fielder at second base to a Gold Glove winner in one season with Hill. Gordon reflects on the basic, repetitive training that helped get him that award.

Gordon, the fifth infielder to win a Gold Glove under Hill (Castillo won three), says the transition began the first day of spring training in 2015, when the Marlins infield coach had him making throws to first with his eyes closed.

“I did it, and I was listening for [it to hit] the chain-link fence behind us,” Gordon says. “I heard ‘pop,’ and I was like, no way. The dude was at first base holding the [ball in his] glove and I was like, ‘Wow!’

This all seems very simplistic, but for the Marlins, it seems to have mostly worked. Gordon is the most obvious example, but Adeiny Hechavarria appears to have benefited as well from training with Hill. After arriving here mostly raw, it seems like Hechavarria may have turned a corner last season with an improved defensive campaign and better numbers to support his reputation as one of the most talented shortstops in baseball defensively.

One way that Hill is probably doing this is through positioning. And that positioning is itself based on data calculation.

None of that is left to chance. After every game, Hill watches the video and records where every ball was hit by the opposing team. He meticulously draws the lines for every ball hit into play on color-coded fielding charts that he keeps for every player who bats against the Marlins, also noting the pitcher, count and type of pitch.

The information is used for positioning his fielders. Before each game, Hill moves around the infield making marks in the dirt that indicate where each fielder is to go when he motions them right or left from the dugout.

The data behind Hill’s recommendations are actually exactly what proprietary zone-based metrics use to create their numbers. Much like Hill’s meticulous batted ball markings for infield-affected balls, data stringers keep an eye on and mark locations and make qualifications based on batted ball type, hard-hit quality, and count. In a way, Hill’s tracking is the basis for these sorts of statistics.

The metrics take an extra step, compiling the data of several batted balls into similar “buckets” and determining how well fielders at each position handle those buckets. Of course, this approach has its fair share of biases; the data is still recorded in a subjective fashion, as both Hill and data stringers are using video or live scoring to mark locations of the ball, and qualitative assessments are made for certain characteristics. However, if this data proves invaluable for helping infielders position better, why would it not be valuable in providing information about a fielder’s performance? Furthermore, the data at least attempts something that any individual scout would have difficulty doing: contemporaneous measurement.

This is where eyes on the field watching where a fielder starts his positioning is imperative not only in informing us about future performance but also possibly instructing talent on the field. A coach like Perry Hill has a lifetime of baseball knowledge behind him and has eyes on the field, so he can assess positioning problems or an issue with reactions or first step and help address those concerns. However, the numbers can assess where the problems are relative to other players at the position, and that information can help diagnose the general direction of the problem, even if it does not prescribe the solution.

Hechavarria had been a subject of this exact type of situation after the 2013 season. BIS data showed that he was near dead-last in making plays to his right after that year, and Perry Hill seemed to have listened or at least been open to the suggestion of this.

Based on BIS research, no shortstop in baseball was better at fielding balls to his left than Hechavarria (plus-15). Among the 35 players with most innings at shortstop, Hechavarria ranked 32nd with a minus-16 on balls to his right.

“When it comes to where he sets up versus right-handed batters, he doesn’t cheat over toward the hole as much as most shortstops do,” Rosales said. “He’s just not making those plays as much as other shortstops are on balls hit toward the hole. If he could focus on that one area of how he positions himself against right-handed batters, [objectively] he could be just as good as anybody else.”

Added Marlins infield coach Perry Hill: “I guess the numbers don’t lie. I need to do a better job getting him in the right place, bottom line. I saw a lot of good shortstops. I didn’t see anyone that was any better than him.”

Hill still had the same opinion of Hechavarria’s skill, but he was open to the assessment that the numbers pointed out his plays to the right were weaker. Two years later, Hill and Hechavarria have worked together for a near-Gold Glove campaign with numbers in full support. If the proper adjustments were made based in part on that data, I think it speaks to both the fundamental approach of positioning and basic of a legendary fielding coach and the right prompting by data, a would-be ideal blend of both worlds.