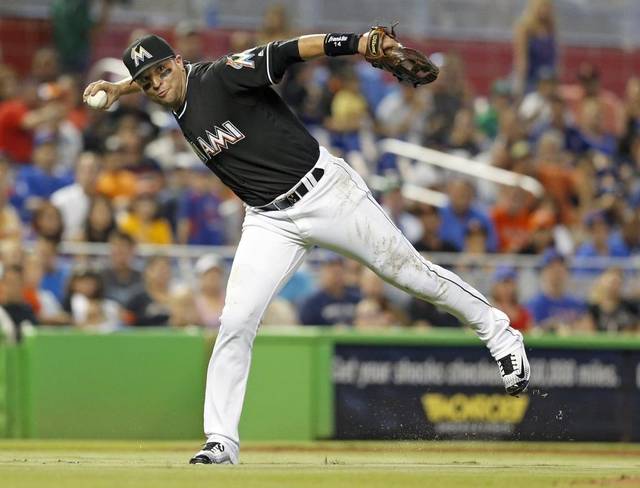 The Marlins set club records for fewest errors and fielding percentage last season. A year later, their infield has put together a streak of mistake-free defense that hasn’t been done in over a century.

A year later, their infield has put together a streak of mistake-free defense that hasn’t been done in over a century.

Following the team’s victory Sunday over the Cubs, the Marlins extended its streak of games without an error by its infield to 26.

According to STATS LLC, it is the longest such streak by any major-league team since 1913.

The streak, which began May 30, surpassed the Orioles’ 25-game run without an infield error they set last season from May 22-June 15.

Since 2004 only three other teams – the Phillies, Giants and Mariners put together streaks that reached 24 games.

“The defense has been really good,” Marlins manager Don Mattingly said. “We seemed shaky early, but we’ve really kind of hit our stride.”

The Marlins have committed only three errors overall in June – the fewest of any team in the majors.

Their fielding percentage matches their final total last season, which ranked second in the majors, and is the same as the one posted by the 2003 World Series championship team’s infield.

“We’ve been a pretty good defensive club, and we thought we would be [again],” Mattingly said. “Martin’s been unbelievable at third. Hechavarria, obviously, he’s been one of those guys on the Gold Glove list the last few years. Derek’s been solid. Justin Bour’s been fine at first.”

Infielders coach Perry Hill compared the unit to the one he coached in 2003 that had Derrek Lee at first, Luis Castillo at second, Alex Gonzalez at shortstop and Mike Lowell at third. Lee and Castillo both won Gold Gloves that year.

Remarkably the squad has put together its historic run without 2015 Gold Glove second baseman Dee Gordon, who is serving an 80-game suspension for testing positive for performance-enhancing drugs.

Dietrich proving himself a more than adequate substitute so far has been huge.

In his fourth season in the majors, Dietrich has made only three errors in 184 defensive chances at second and 209 overall. Dietrich has started 47 games at second base since Gordon’s suspension.

Dietrich’s defensive skills weren’t highly-regarded entering the year, having committed 12 errors in 101 games at second base over his first three seasons in the majors.

“A lot of the credit has to go to Perry Hill and the way he prepares us to do our job,” Dietrich said. “He’s helped me trust myself and just slow the game down.”

Hechavarria, a Gold Glove finalist at shortstop last season, got off to a tough start this season, making two errors on Opening Day, but has made only two more since in 264 chances.

Prado has been stellar at third, committing only two errors in 153 chances, and Bour has made only three errors in 412 chances in his second season as the team’s regular first baseman.

Reserve infielders Chris Johnson (one error in 184 defensive chances) and Miguel Rojas (two errors in 139 chances) have held their end as well.

Jose Fernandez superstitiously knocked on the table in front of him during a press conference following Sunday’s win when asked about the infield defense.