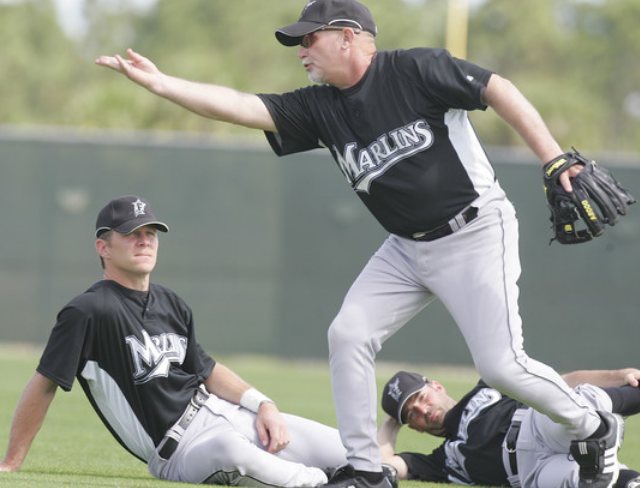 No matter how die hard you think you are... you haven't seen anything until you have seen the Florida Marlins defensive genius, Perry Hill in action who I learned about at Spring Training this year.

Web gems – they are easily one of the most exciting parts of the game. The footwork, quick hands, and finesse it requires to be a middle infielder ‘turning two’ may be the most poetic and graceful movement in a game of baseball. And whenever you start to think about how easy they make it look, remember the great Teddy Williams when he said, “Ballplayers are not born great. They’re not born great hitters or pitchers or managers, and luck isn’t the big factor. No one has come up with a substitute for hard work. I’ve never met a great player who didn’t have to work harder at learning to play ball than anything else he ever did.” Now, remember to yourself that these players put in endless hours of repetitive drills in order to make it look “that easy.” Each ballplayer, no matter his background or where he use to play, has done the same drills – the same footwork, glove-hand transfers, and charges to the ball for decades. For the elite, which every major leaguer is, did more work than his fellow peers in high school, summer ball, and college and that is why he is in the Majors today. That… and he survived the Minor Leagues.

The amount of work that goes on behind the scenes, you can’t even imagine. I still can’t believe how much I learn on a daily basis about the wear and tear of the practice put in before a game. No matter how die hard you think you are… you haven’t seen anything until you have seen the Florida Marlins defensive genius, Perry Hill in action who I learned about at Spring Training this year. I read an article in USA Today’s Sports Weekly (March 23-29) written by Paul White entitled, “Years of glove and devotion pay off.” What I learned about was someone worth the time of the most die hard baseball fans out there… and then I started my research. I spent an entire afternoon looking up every stat or article ever written about Perry. I watch video after video of defensive plays by his highest regarded pupils, too.

Perry Hill’s current, official title with the Florida Marlins is first base coach, but what he teaches and instills throughout Spring Training and the grind of the regular season is something that players around the majors appreciate and respect. Luis Castillo, a 6 time gold glove winner, accredits all of his success to his former coach, Hill. In fact, Castillo even sent Hill the first ever gold glove that he earned in 2003. And, it doesn’t stop there – ask Castillo about Hill today- he still pays him full credit – “I’ve spent a long time in the big leagues. It wouldn’t have happened without him,” he told White in the USA Today article. Derrek Lee, Orlando Cabrera, and Mike Lowell are other Hill disciples who have also sent their teacher their respects – in the form the mitts they used in their gold glove years, including Lee’s which is personalized.

Hill never played a day in the major leagues, but did hold a brief minor league career. Nevertheless, his reputation as a defensive guru proceeds him. He’s in his 17th season as a major league coach, of his 26 years spent in pro ball. In 1997 he was hired by the Detroit Tigers, the worst fielding team in the majors, and within the year he transformed them into the team with the best fielding percentage among the majors. Before a brief three year retirement in 2006 he also was employed by the Montreal Expo’s where he was introduced to Castillo. But, baseball could never get away from Hill. He was coaxed back by the Pirates in 2009, where he continued his tradition of making his team lead in fielding percentage (.988) with the fewest errors (73) among all teams. He also set a club record for most errorless games played in one season (101). After an agreement on an extension could not be met, he rejoined the Marlins this year. When asked about his view of importance on defense, Hill said, “It’s one of three vital parts of the game. Defense affects the whole game. If you don’t make a play, your starting pitcher might have to throw 10, 15 more pitches to get out of an inning. Now, he’s going to have to come out of the game in the seventh when he could have gone another inning. So you use your bullpen more. And then your bullpen is tired the next day, and maybe you don’t win the game because of it.” Although it seems like common sense, we seem to forget about those behind the scenes people who’s job it is to enforce this.

The accolades for Perry Hill go on and on. If I were to include every quote about him that I found online and in articles, you would stop reading because you’d probably yell “I get it already!!!” And while all those quotes would just solidify your respect for the man, I’d rather encourage you to do the work yourself. The next time the Marlins come to your city, go to the game and make sure you get there when the gates open for batting practice. You’ll see Hill hitting grounders to infielders, side coaching players and always with a smile on his face while he don’s his #7 jersey – because Hill loves baseball. He loves baseball as much as any fan or player and he treats the game with respect while passing on his knowledge to his players. Castillo calls Hill, “..a smart man; the most positive person and the best infield coach” he’s ever worked with. He’s consistent, whether be in the clubhouse or on the field. His players even wear t-shirts under their jerseys that say, “27 Outs, No More” showing their belief in Hill’s sounding moto of defensive consciousness.

Always remember the people behind the scenes who help make the athletes into stars. The construction of a good Major League team starts with the coaches/front office and ends with the players on the field. Good coaching divides the elite from the rest. Hill has also has a DVD entitled “Ultimate Infield”, an instructional video on the fundamentals of fielding for anyone interested in honing their coaching skills or who knows a player who could use it.