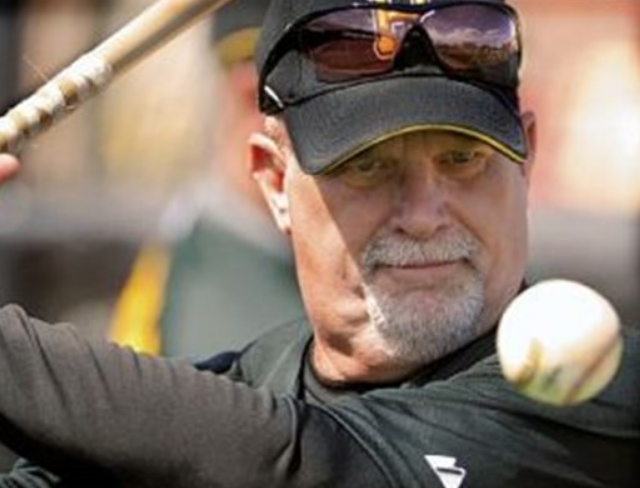 Monuments to infield coach Perry Hill's career adorn the shelves of his home back in Lantana, Texas.

BRADENTON, Fla. — Monuments to infield coach Perry Hill’s career adorn the shelves of his home back in Lantana, Texas.

There is the first of three Gold Gloves bestowed upon his former second baseman. The award arrived in a big, brown box addressed to Hill and left waiting for him in the clubhouse of Miami’s Pro Player Stadium.

There is the mitt worn the year his shortstop won a Gold Glove.

There is the mitt worn the year his third baseman won a Gold Glove.

There is the special-edition trapper that his first baseman had the manufacturer stitch “Derrek Lee, 2003, Gold Glove,” then sent to his coach.

An entire Gold Glove infield, all from the Montreal Expos and Florida Marlins 2000-05.

All awarded, for all his assists, to Hill.

“Guru? I don’t know about that,” the Pirates’ new infield and first base coach said the other day. He was referring to followers old, such as second baseman Luis Castillo (2003-05 Gold Gloves with Florida), shortstop Orlando Cabrera (2001 Montreal and 2007 Angels), third baseman Mike Lowell (2005 Florida) plus Lee (2003 Florida and 2005/2007 Cubs), and followers new, such as Freddy Sanchez plus sidekick Jack Wilson. Hill fashioned his gray moustache and goatee into a wry grin. “I got some of them fooled.”

“He was very important to me,” Castillo said from the New York Mets’ camp. “Before him, I never won a Gold Glove. That’s why I gave him my first one. After I started working with him, I won three straight. He is a very positive person and the best infield coach I’ve ever worked with. He never got down on anyone.”

“No father-figure stories,” Lowell said from Boston Red Sox camp. “But I think what he does best is he backs it up. He’ll go on film and say, ‘Hey, I was looking on film, and this is what I’m talking about.’ I’ll bet he already has a good rapport with those guys after about a week. He knows his stuff.”

Try the testimony of Houston’s Aaron Boone, a third baseman whom Hill — before he temporarily retired to tend to his ailing wife in March 2007 — transformed into a first-time first baseman in just a few weeks of spring training: “I had heard going in, ‘Oh, Perry Hill is a great infield coach. . . .’ And I’m like, how great can an infield coach be? But he really is, man. I just never thought you could teach infield as well as he does. If my son is into baseball when he’s 15 years old, I’m sending him to spend a week with Perry Hill.”

Or, finally, take it from an eight-time Gold Glove winner, Hall of Famer and second baseman with the all-time record for turning double plays in a season. Offered a usually reserved Bill Mazeroski after a couple of weeks here watching Hill work with the Pirates: “That guy runs a hell of a camp.”

He brings them to their knees. Not merely because he is entertaining, with his constant exhortations during infield drills where three balls get batted in succession, to third, first and, by Hill, up the middle: Stop it, I can’t take it, American Express, don’t leave home without it, orThese are outs, gotta have these. In fact, one morning relay practice at Pirate City, most of the position players beat him to the punch-line on the final, successful drill, chanting in unison: Stop it.

Rather, Hill has his Pirates infielders taking ground balls on their knees as a proper preparation. Pitchers throw. Batters swing. Infielders … field. A warm-up for their hands, as Sanchez translated it.

“He explains everything,” Sanchez said. “You know, not just, ‘Do this, do that.’ But why you’re doing it, the effects it will have on you. His knowledge, his reasons behind everything — little things that we’ve heard playing this game for so many years, but we never thought about the things that he’s talked about.”

It isn’t all grounders and giggles. Sanchez reported on time to a scheduled infield practice one February morning, and Hill — deeming that sufficiently tardy — sent him back to the clubhouse feeling scolded. Count Sanchez as an early-arriving follower now.

“I heard about his reputation. But I never knew him. Never even seen him before, I don’t think,” Sanchez said. “You can see it, see why he’s the best in the game. He’s been unbelievable so far. Someone you want to learn from. Someone you want to be out there with every day, early work, learning more.”

“When he talks,” added third baseman Andy LaRoche, “everybody listens.”

Some of Hill’s techniques seem so basic: funnel the ball to the middle of your body, shuffle to throw, a straight line of three fielders on a relay. He has worked on a throwing motion to alleviate stress on Sanchez’s surgically repaired shoulder. He has worked with first-round draft choice Pedro Alvarez before practice. He has worked after practice with Ramon Vazquez on whatever positions the utility infielder didn’t cover in that day’s drills. He has worked with every infielder in the Pirates’ big-league camp.

“Mr. Energy,” Pirates manager John Russell said. “He loves what he does.”

“I don’t know if they like me,” Hill, 57, joked about his students. “They listen because everybody wants to learn and hear new ideas. I know I do. What I teach, I teach with conviction. The guys have been real good, accepting what I teach and why. I think maybe it sells because we can back it up with a reason.”

For instance, a decade and a half ago, a certain Texas Rangers infield coach forced Russell, the then-catcher, to join him and the boys in daily pregame infield drills.

Russell picked up the tale: “I’m glad he did. It was invaluable for me.”

Hill was an infielder back in the day. He grew up in Texas, where the football coaches who lost the coin flip were forced to coach high school baseball in the spring, as he put it. Hence, he became a do-it-yourselfer. Such a work ethic carried him only so far in baseball — two junior-college years, some time at Pan American University in Texas, a half-dozen years in Mexico’s pro ranks — before he turned to teaching.

He started with the Rangers’ Class A team in 1984, then rose through the organization until he became the parent club’s infield and first base coach from 1992-95. He spent three years with Detroit, which became the first major-league club to go from worst to first in fielding percentage. He spent 2000-01 with Montreal and the next five seasons with Florida before he left in March 2007 to be with wife Olivia — whom he said is better from an illness he declines to discuss — and Alexis, now 6, and Perry Jr., 2.

“He relayed that he would like to get back in the game,” Russell said. “Neal and I talked about it a lot, that when he was ready we would try to get him over here. We’re extremely happy he’s here. He’s already made a difference in our players. He’ll continue to do that.”

Can Hill help a team with two former first-round picks (Alvarez and Neil Walker of Pine-Richland) joining the unproven LaRoche at third base plus 31-year-olds up the middle — in Sanchez and shortstop Wilson — backed by such mid-20s potential replacements as Shelby Ford and Brian Bixler?

“Absolutely,” Lowell said. “He’s going to realize there are a lot of guys with good talent. What he’s trying to do is bring that out. I’d be surprised if Pittsburgh doesn’t see an improvement from one year to the next.”

“The Pirates are very lucky to have him on their team,” Castillo added.

Continued Florida’s Dan Uggla, a second baseman who used to have Hill’s “Bone” nickname stitched into his glove: “He knows pretty much all there is to know about playing defense on the infield.”

A secret to his success: plugs (no, not the hair kind … this man’s as bald as a baseball) to align his defense from his top-step dugout perch, “and I never move from that one spot,” Hill inserts white plugs — imagine golf tees — into the infield dirt. That is their starting point. From there, he places the infielders in position for each hitter, each pitcher, each situation he meticulously charts and studies. He maintains he won’t use charts from 1990s Texas or even 2007 Pirates, though all are at his fingertips.

The seeds for this positioning routine go back to his Texas days, all because Boston’s Fenway Park afforded horrendous vantage points from the dugout. An idea was planted. Then, the plugs were.

Before games, he places baseballs on each plug, returns to the dugout and matches each with a marker in the distance — a stanchion, a sign, something to use as a marker. Thus, he knows where to move his guys.

“I can’t tell you the theory behind it,” Hill said. “It’s the way we keep guys from standing in the same spot all the time. Moving with the count. Moving with the location. But I kind of keep that hush-hush.

“They’re just little white things that are in the ground in case we get lost on the field. Even veteran players every once in awhile need some help. It’s kind of a security blanket for them.” He pointed to McKechnie Field, the practice infield out back, 36 blocks east to Pirate City: plugs are all out there.

“The coaches in the dugout, we have the worst seat in the house,” Hill said. “We’re sideways. The angles are bad. So I came up with it for that reason. It’s better than just guessing.”

For Hill, simplicity and consistency and sound reasoning are among rules that are golden.